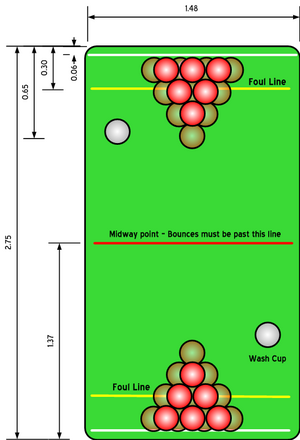 Beer Pong (A.K.A. Beirut) is an exciting drinking game to play with a group of friends, or at parties. The game originated in the 1980's in Beirut, Lebanon. Over the years the game has evolved into a favorite past time of young adults around the world. It involves four people, teams of two, where a ping pong ball is propelled across a table aiming at one of the opponents cups. When a ball is sunk in a cup the players from the team scored upon have to drink its contents. Once all the other side's cups are empty that team has won.

The game originated on an actual ping pong table, but can be played on any flat surface with enough surface space to hold the two cup formations a minimum of 6' apart. In official beer pong games a 2'x 8' table is used, such as the ones sold on our site.

Solo or Dixie 16 ounce cups are the cup of choice for most beer pong players. These cups have rigid-lines, which can assist in precisely measuring the amount of beer (or other beverage) in the cups. Fill each of the cups a quarter of the way full. In situations where the table is shorter, lower, or the teams are unevenly matched smaller cups may be used.

The most common formation is an equilateral tringle with either 6 or 10 cups. The formation is assembled on each side of the table.

The two different basic options a beer pong player has on offense are the standard shot and the bounce shot. Both players from one of the teams are given a ping pong ball to shoot and may do so simultaneously. Both players from each team must have taken a shot before the other team can shoot. The standard shot is comprised of the player tossing the ball across the table and into an opponent's cup. The bounce shot is performed by bouncing the ball off the table and into the opponent's cups. The ball can bounce many times then go into the cup, but should be avoided because of the bounce shot may be swatted away by your opponent's hands. This shot is a little more difficult than the others, so it is worth two cups. The one in which it landed is pulled, then an additional cup is chosen by the team that was scored upon.

The center of the cup formation is used as a common boundary, particularly when playing on a lower or shorter table. This can be a real advantage for taller players to outstretch across the table. This rule is commonly known as the elbow rule. When the rule is broken the shooter will be forced to retake the shot, and any cups scored on during this infraction will not count. (If confused of this line refer the diagram of the table in the setup section.) 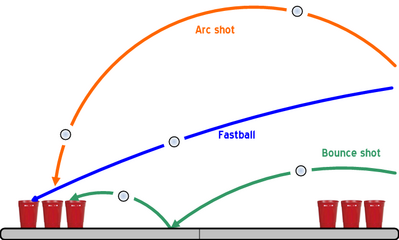 Reracking refers to when the arrangement of the cups is changed after a shot is made. Each team is given only one rerack and may not be used until at least two cups have been made. Strategy should be used to pick the right time for a rerack during the game. A rerack may not be used during the middle of a round of throwing. Only after both players have taken there turn at throwing may it be called.

A player should be designated to watch over the cups at all times during and opposing teams turn of shooting. As explained before a bounce shot may be swatted, but the swatting player must be careful not to knock over any of his own cups or goal tend on a standard shot. If a player knocks over one of his own cups while trying to swat at the ball that cups is removed from the game. It may be a teams strategy to bounce and shoot at the same time to confuse the defense, a standard shot may not be swatted or that is goal-tending. When goaltending occurs the shooter is given the ball back to retake the shot.

Getting under the opponent's skin, or "shit talking," is a very effective way to get them off of their game. Women have been known to use their sexuality to throw off male players by standing in provocative posses. Any form of this is accepted as long as it does not breach the opponents view of the cups.

Sometimes when a shot is made into a cup it doesn't go directly down into the cup. It first spins around the edge of the cup. When this occurs females are allowed to blow the ball off its path and out of the cup. If she is successful, the made cup does not count. Just like women can blow at the cups men have the right to try and finger the ball out using their index finger. Both techniques are very difficult and have to been done very quick, because the ball doesn't spin around the edge very long.